The Mind's Eye
A Couple Of Things
Posted by Bird @ 10:37 pm CST
Filed under: General

So it really snowed like crazy yesterday. I had never seen a life-size snowman in person until yesterday and today. We didn't make one, but several people around our neighborhood did. Very cool.

In other news, the 17 new meat birds are doing just fine. They're little pigs, munching like crazy. We'll slaughter them within 4 to 6 weeks.

Next to our barn, in front of our pasture: In front of the barn, next to our soon-to-be garden: Record Snow?
Posted by Bird @ 7:26 am CST
Filed under: General

It snowed overnight. That's the third snowfall we've received this winter. I have to admit, waking up to snow on the ground is nice, but it's not as magical the third time around. It's funny, though, because just two days ago the temperature was in the upper-70s.

We could get six inches of snow today, which would be some kind of Waco area record.

I updated my photo business website. I still have a lot I want to do with it (like add Flash), but I'm happy with where it's at right now. It's on a free server right now, but you can get there via the original url: photowaco.com.

Last Snow Shot From The Other Day
Posted by Bird @ 1:49 pm CST
Filed under: Family, The Farm, Photos

Brandi and I really liked this one. It was taken in the morning hours, after it had snowed most of the night. I want to make a rocket stove. I saw on Youtube that you can even make a simple rocket stove out of cinder blocks. I might try that to start out, but eventually what I'd really like is something like this: 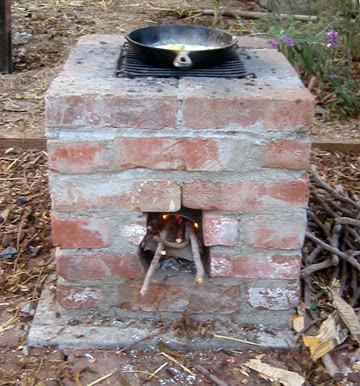 The cool thing about a rocket stove is you can supposedly cook an entire meal using twigs and small sticks you find laying around your property. It's like free energy! Here's the idea behind a rocket stove:

From a couple of days ago: No Grumbling
Posted by Bird @ 1:31 pm CST
Filed under: Family

"Hope all things about your brethren"
Posted by Bird @ 10:49 am CST
Filed under: Christianity, C.S. Lewis

My friend Phil over at Thinklings posted a semi-long Spurgeon passage that I love. Go read it here.

Here's one of my favorite parts:

Love's third great labour is in "hoping all things." Love never despairs. She believes in good things yet to come in her fellow-men, even if she cannot believe in any present good in them. Hope all things about your brethren. Suppose a friend is a member of the church, and you cannot see any clear signs of grace in him, hope all things about him. Many true believers are weak in faith, and the operations of grace are dim in them; and some are placed in positions where the grace they have is much hindered and hampered: let us take these things into consideration. It is hard to tell how little grace may yet suffice for salvation: it is not ours to judge.

This reminds me of the Lewisian idea (from God in the Dock) of only God knowing how much work grace has done in someone's life. Is someone a curmudgeon? Lewis would say, then perhaps with Christ they're much less of a curmudgeon than they would have been without Christ. Sanctification is a beautiful thing. And one of the paradoxes of Christianity -- and oh how I truly love the paradoxes -- is that we are sanctified and we are holy, yet we are being sanctified and we are called to be holy.
no trackbacks leave a comment

Another Snow Shot
Posted by Bird @ 10:59 am CST
Filed under: Family, Photos

Here's a shot from two evenings ago. I've got some better snow shots from yesterday morning (when the snow was thicker), but I haven't had time to process them yet (digitally, that is). The buzz yesterday was about how Dallas (about an hour north of us) had gotten about four-to-six inches of snow, and that the snow was headed toward Waco. Thankfully, we got a nice little snowfall here yesterday evening, and we even had a decent accumulation overnight. Here's a pic from yesterday evening: Apparently we lost a duck hen last night. We own two hens and a drake (male), and I'm thinking that one of the hens got eaten last night ... or something. At any rate, she's not around anymore. I really hope our current drake and hen make it to spring time so they'll start reproducing.

Brandi and the kids loosening soil and pulling up roots: After pulling up a bunch of roots, Brandi put a couple of chickens in our small tractor (cage) and put them on top of the soil she had just worked on. The idea is the chickens will scratch at the ground and loosen it up further, eat bugs, and fertilize it with their droppings.

A country friend of mine told me that if we're going to live out in the country then we need to get used to death. Chickens die. Ducks die. Goats die. Cows die. Et cetera.

We've only lost one animal to predation, our big boy duck. I miss that duck, mainly because he was huge and I was looking forward to eating him one day. (We ended up getting a replacement boy duck and he's doing just fine.)

Of course, last week I killed our six meat birds -- and we just ate one for dinner tonight! Now that we're hooked on eating chickens that we raise, I think we'll end up always having birds around here that are on death row.

In case anyone's wondering, the kids were fine with the meat birds being butchered. While they didn't take part in the butchering process, they all say they eventually want to help. Actually, they'll have to start helping one day because harvesting meat has got to be a family endeavor, otherwise it's way too much work for one person. I think when we get set up to butcher birds here in April, I'll give the kids the job of plucking feathers.

A lot of times when we talk to people about raising animals to kill, people wonder how the kids handle it. I think being so far removed from farm life, it's a natural question, and, of course, our kids haven't been fully exposed to farm death yet. Once in a while, though, someone will come along who really seems to think that kids being around death is somehow bad for them, but, as James T. Kirk said in The Wrath of Khan, "How we deal with death is at least as important as how we deal with life." If properly prepped, I think just about any normal kid can handle a normal amount of farm-related death. And as far as it being bad for kids, I tend to doubt that.

Brandi and I were talking today about how fresh chicken doesn't smell like anything. It's strange, but it has no odor. I'm assuming the raw chicken smell kicks in a few days after death.

We just ordered 17 more meat birds today. The chicks will arrive next Thursday and they'll be ready to harvest in early April. I'm toying with the idea of setting up a slaughter-station at our house, rather than going to the guy's house who showed me the ropes a couple of days ago. He's got a nice set-up though, complete with stainless steel tables and a commercial plucking machine. If we slaughtered these new birds at our place, we'd have to pluck by hand, but I don't think it would be a big deal. When the chickens are properly prepared (via hot water), the feathers fall off pretty easily.

The Harvest
Posted by Bird @ 11:35 pm CST
Filed under: Life, General, The Farm

I expected us to harvest our meat chickens this weekend, but the dude who was going to show me the ropes had to do it sooner. So I ended up whacking those birds yesterday.

It wasn't as hard as I thought it was going to be. Even the actual killing process (slicing their jugular vein) was pretty straight forward. And as far as gutting goes, if you've gutted a decent size fish then gutting a chicken wouldn't be hard to pick up.

Tonight Brandi fried up one of the birds and we enjoyed the best fried chicken ever with my brother and our friend, Andrew. Seriously, the stuff was DELICIOUS.

We're all about raising our own meat birds now. We've already got plans to order a whole bunch of them here pretty soon so we can slaughter them by late spring. By that time we'll hopefully be ready to harvest some of our ducks as well.

View Recent Comments
Login
1 Timothy 1:15: This is a faithful saying and worthy of all acceptance, that Christ Jesus came into the world to save sinners, of whom I am chief.
Welcome to The Mind's Eye. My name is Eric (aka Bird), and I'm a 36-year-old husband and father of four. My family and I live on a little 2-acre homestead in Central Texas, and we joyfully attend Antioch Community Church in Waco. My interests are theology, photojournalism, reading, writing, chess, and hobby farming. Thanks for dropping by.
What I'm Reading

Daily Passage
And he said, "Naked I came from my mother's womb, and naked shall I return. The LORD gave, and the LORD has taken away; blessed be the name of the LORD."
Job 1:21 (ESV)
Categories
Search
RSS Feeds